This week’s Five Minute Friday word is nothing, so here goes…well, nothing. 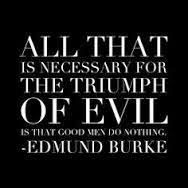 I believe in this quote wholeheartedly and I try in earnest to live it out.  But sometimes, I don’t do so well.  A few weeks ago, I was waiting for the bus.  I stepped into the bus shelter because it was raining.  As usual, I pulled out my phone and started checking my social media accounts.  A few seconds later, an older woman stepped into the shelter and confronted a man sitting on the bench inside who was smoking.  She told him that he needed to put out his cigarette and pointed him to the sign that stated it was no allowed.  He flipped out, screaming and cursing at her.  No one turned, no one looked.  She turned and walked away.  And left me ashamed for not saying a word. He ended up putting out his cigarette and going back into the building.  Even still, my shame stood with me.  I watched the woman, trying to will myself to go over and thank her for her bravery and apologize for my lack.  I watched her until she got on the bus and pulled away.  And weeks later, I’m still ashamed of myself.  If I didn’t stand up and side with right in something as minor as that, how can I expect to in a situation where the stakes are higher?  I have but history clearly does not always repeat.

2 thoughts on “Five Minute Friday: Nothing”