We had book club last week at one of more frequent haunts.  A friend ordered a dish I hadn’t tried before and it came with “creamy dijon bacon shallot brussel sprouts”.  One taste and I was already trying to figure out how to make this deliciousness at home.  A quick Google search led me to a recipe on The Freckled Foodie blog and I decided this was a perfect starting point.

As I’m the queen of shortcut cooking, I headed off to Trader Joe’s to get the necessary ingredients:

The directions are fairly straightforward, even for the cooking-challenged:

Preheat the oven to 400 degrees.

Cover a cookie sheet with aluminum foil and spray lightly with cooking spray.

Combine the brussel sprouts and shallots in a large bowl. 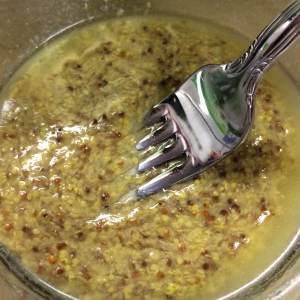 Spread evenly on your prepared pan. 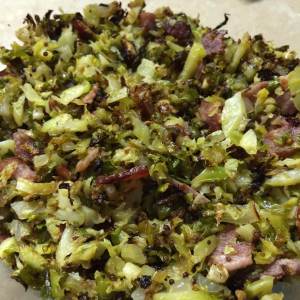 Bake for 30-35 minutes, stirring every 10 minutes or so until it starts to brown and crisp. 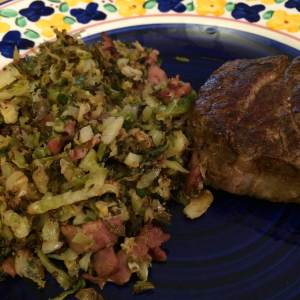 Serve in whatever way suits your fancy. I went with a pan seared filet.

Hey, y’all…I’m guest blogging over at Careless in the Care of God today.  Stop by!

I punched fear in the face today. It felt pretty good.

We’ve all got dreams.  We all have big ideas.  We all, deep down, want something in our lives to be different.  But it’s so easy to get caught up in the what ifs, the negative self-talk, and let our insecurities reign and paralyze us. It’s happened to me more times that I can count and I know for a fact it will happen again and again.  It’s just how I’m wired.  But sometimes, you need to put that all aside, evaluate your options, and take a leap of faith.

What’s the worst thing that can happen?

A few years ago, I read a book by Jon Acuff called Quitter.  I was really struggling with work at the time and actually picked up the book in hopes that it would reveal a secret escape route.  But the key, Acuff said, isn’t just quitting the day job you’re struggling through each day. It’s about making the most of where you are so that you can eventually move forward with your dream – with a plan and a soft place to land.

Honestly, I didn’t like that idea.  I was in a place where I felt like my only option was to blow up my life and start again (which I’ve done and survived, which is likely why the idea sometimes sneaks back into my psyche.)  But Acuff’s words stuck with me and I stuck with the job.

His next book, happily, followed up on the idea of building your dreams.  Start‘s tagline is one of my favorites:  “Punch Fear in the Face, Escape Average, and Do Work that Matters”.   I read it around the same time as I read Donald Miller’s A Million Miles in a Thousand Years and both really resonated with me.  The need for purpose, to make what you do matters, is within all of us. It just looks different in each of our lives, as it should.  And it was time for me to start thinking about mine and continue with some steps I’d already begun with my mission trip to Romania.  I took a huge leap of faith to accept a job in another state, five hours away from all I’d ever known and all I loved.  Frankly, being alone in a new place gave me an opportunity to “dabble” a bit in a few things and try to find out where I wanted to end up;  through all the difficulties, I can say that for that I am thankful.

Just before the new year, I answered an odd email to subscribers of Jon Acuff’s blog.  “Adventurers wanted” was about all it said and I thought what the heck.  I filled out the form, on which you had to list a big dream.  I did so and submitted it without much more thought.

Soon, I learned that he was launching an online community for people to work on their dreams.  I had no idea what it would look like or how folks would interact.  Each day for 30 days in January, we got an email from Jon, giving us something to do or think about, and post about in the group. Seven months later, it’s so interesting to see all I’ve gained from this group.  I’ve met some really cool people I’d never in a million years have crossed paths with otherwise.  But even more than that aspect, I’ve seen people really working toward their dreams – and in the process, encouraging myself and others.

I’m generally fairly quiet in the groups.  I’ll comment now & again and try to offer folks a positive or kind word.  I’ve occasionally posted my own questions and projects for feedback.  But in the past seven months, being a part of the group has encouraged me to look at what my dreams and goals really are and examine how best to achieve them.  And do you know what I’ve learned, time and time again?  Sometimes you need to just tell the negative inner voices to take a hike, punch fear in the face, and leap…because really cool things can happen.  You can find enough gumption to submit an abstract for an online conference, get accepted and present on a topic dear to you – even if you are so scared you feel like you might be sick.  You can keep trying to figure out how to match your passion and purpose with where you’ve found yourself today and not give up.  You can invite an acquaintance for coffee to pick their brain about a new direction that interests you and come away promising that person a proposal detailing some new projects you may work on together – moving you in that new direction you were hoping for.

All because you took a chance.

All because you punched fear in the face.