Last year, I heard about a training program in my town for women who wanted to do a 4-Miler race in the fall.  I signed up, hoping it would be another chance to meet people (and I’m happy to say that did happen.)  Every Saturday, I dragged my butt out of bed and to the university track at 6:45 AM to train.  I had days where I felt great and days where I didn’t think I’d ever be able to walk 4 miles straight.  I had days when I felt like it wasn’t good enough to just walk it.  But I did it and felt in every sense of the word that I had accomplished something huge.

It seemed natural, then, that I would sign up again this year and so I did.  And I started off strong, dragging a friend with me and walking two nights a week.  But it’s been a struggle. Honestly, I am still struggling with walking not being enough.  In my logical rational mind, I know that is silly.  I’m doing more than the person sitting on their couch  but I can’t tell you how many times people who run have made negative comments about their own dismay in “having to walk” part of the race or about someone else “having to walk” or “just walking”.  And it makes me feel bad about myself. Add to that the fact that the summer started off hot and so humid I was left breathless with any exertion.  I’ve also been dealing with a lot of pain – hips, back, achilles – and my insurance wouldn’t allow me back to my trust physical therapists until next week; dealing with chronic pain for over 14 years usually has me push through but lately I’ve not felt it wise to do so. More Saturday mornings than not, I’ve just wanted to stay in bed and catch up on the sleep I’ve missed due to work, stress, and various other things.

But why in the world do I feel guilty about not doing something that basically only impacts me?  Sure, my friends may be disappointed if I don’t follow through but it’s not a deal breaker for our relationships.  They know I’ve been struggling and have had struggles of their own.  No, it all goes back to me and this standard I’ve set for myself (and sometimes for others) of following through on commitments, no matter how tired or busy I am, no matter how much I simply don’t “feel like it”.  Not feeling like it never seems like a good enough reason to bail on anything, in my perspective.  But why isn’t it?

I did it last year.  I fought through and showed myself and my world I could do it.  There is no shame in bowing out gracefully this year, despite the commitment.  The money goes to a good cause, after all, whether I train or not, whether I do the race or not.  And what’s the worst thing that happens if I don’t do it?  Absolutely nothing.  Will the world end?  Certainly not.  Will wars break out?  No.  Will people shun me or tease me?  Not likely.  But yet I still feel disappointed in myself, despite the fact that everything in me is screaming, “I don’t wanna!” and the grown up, rational part of me is whispering, “And you don’t have to.”

This Yankee decided to try her hand at making some fried green tomatoes last week.  I’d seen them on menus around town and still recall the dish I had at the Court of Two Sisters in NoLA many years ago (they were THAT good!)  While perusing the farmers’ market with a friend, I decided to pick some up and see what I could muster in my own tiny kitchen.

True to form, I went online and found various recipes…then decided to do my own variation after letting them “ripen” for about a week and a half.  I’d been told that they’d work best when they were just starting to take on a pink hue;  they weren’t starting to pink but I was tired of waiting and forged ahead anyway – and ended up pretty pleased with the result.  While I know for sure there is something to be said for frying, I decided to bake them instead for a little bit lighter (and healthier) recipe. 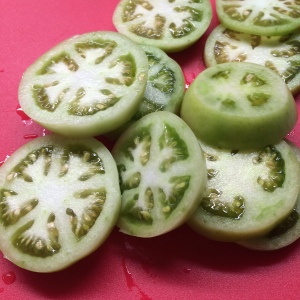 After preheating the oven to 400 degrees, I sliced my green tomatoes.

Next, I mixed up the breading. I chose to use panko, because I prefer it, and mixed in some garlic salt and some paprika.

First, I dredged the tomatoes in flour, then buttermilk and finally the breadcrumb mixture. The process was a bit slow to ensure they were well covered and ready to bake. 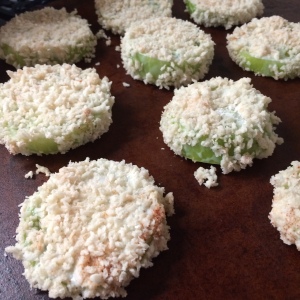 I prefer to use a baking stone whenever possible and did so with these; about 10 – 12 minutes on each side. I’d recommend turning the broiler on for a minute or two if you want the breadcrumbs to brown a bit more. 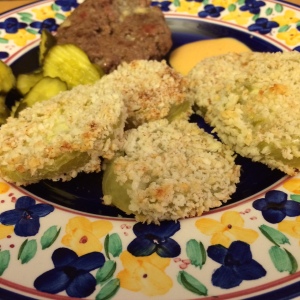 Within 30 minutes, the finished product was plated and ready for dinner! Delish.

I decided a few weeks ago to enter a blog contest.  It is for the visitor’s bureau in my town and the goal is to highlight activities/venues of interest.  There is a ton to do here – it is really quite overwhelming when I think about it sometimes – and I figured that most of the things I take people to when they visit would be highlighted in other’s entries.  After some thought, it came to me:  I wondered if there were any labyrinths in town.

Now, at the outset, this is probably a strange idea to spring to mind.  But I became interested in what is known as “walking the labyrinth” a few years ago when I read a magazine article about it.  While most think of a maze with high shrubbery walls to get lost within as you choose which route to take, a labyrinth is very different.  It generally has a single, non-branching path in to and out from the center.  Some use it a spiritual tool for prayer or meditation, while others find it helpful for relaxation or refocusing.

It was around Easter time a few years ago when I first heard about the practice and I was intrigued.  I was struggling with some personal and professional stress and was really not looking forward to spending another holiday on my own.  I decided that instead of focusing on my singleness and feeling lonely on Easter, I’d instead seek out some local labyrinths and spend time in prayer and reflection.  I found three public labyrinths in the area and set off immediately after church.

Honestly, I felt a little weird.  Here I was, alone on a warm spring day, a holiday, no less, in search of something many had never heard of or even knew existed in our area.  But it seemed fitting, in many ways, so I tried to put that awkward feeling aside.  I remember the first I visited, on the grounds of a church.  It wasn’t very big and I had to figure out where it began so I could begin my walk but as I walked through it, I started to feel my apprehension lifting.  I began to feel calmer, more at peace, and less alone.  The next was similar and I was enjoying my little adventure.  The third and final location, however, was a bit harder to find.  It was in a local park but I couldn’t make heads or tails of where it was.  I walked a trail for a bit and finally found it in the middle of an overgrown field.  It needed tending but the path was visible and so I set out.  Others were walking the trails and could see me, this lone woman, apparently walking in circles in a field.  Again, I felt the awkwardness overtaking me but as I concentrated on the path and focused on my steps, it lifted.  I left feeling refreshed, though I couldn’t rightly pinpoint why or how.  But I knew there was something to this – this stepping outside of oneself for a bit, of putting aside worries and concerns, of focusing on putting one foot in front of the other as the labyrinth took you step by step to the center.

And so that is how it popped into my mind here. I quickly visited the Labyrinth Locator and found two public ones nearby and set off, camera in hand.  Again, as I walked through them I had a similar feeling of peace and of centering;  if you know me, you know that I don’t ascribe to what I often call the “crunchy granola” side of things but there is simply no other way for me to describe the experience.

While I can’t say for sure if my blog entry will get posted, I hope it does.  I think it’s important to look for the unusual in life, to find those local treasures in the day to day that are often overlooked.

The entrance to the labyrinth at Unity of Charlottesville. It suggests removing your shoes, which I hadn’t done in the past, but there was something meaningful about the experience of walking the path barefoot to the center.